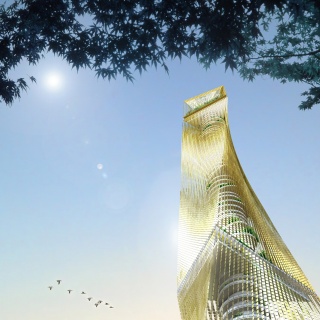 A signal tower 300 metres in height, incorporating a project just 15,000 m² in area and of exemplary ecological intent : the brief struck us as contradictory, given the obvious disparity between the project and the building volume. Our initial focus was therefore the identification of a social function for this object, giving it a purpose, and a commitment to propose an object using the least possible material.

Rather than erecting an empty shell, we proposed that this tower should be made into a vertical public space by the provision of a spiral ramp, encircling the core and providing access to the top. The walkway is sheltered behind a forest of guy wires, which generate the overall shape of the tower while consuming far less material than a traditional façade system. Small gilded panels of anodized aluminium are fastened to the guy wires, creating a skin which is sensitive to variations in light and wind.

The ramp, which is paved with slabs mounted on piezoelectric sensors, also permits the generation of electricity from the vibrations produced by the steps of walkers. The concept of climbing a mountain is a familiar one in Chinese culture.

In Taoist culture, in fact, mountain summits are symbols of purity and wisdom, and are places of meditation. Summits are thus perceived as mysterious locations, and climbing them is considered as a spiritual process rather than a sport. We would therefore consider the proposed climb of some 3 kilometres as entirely in keeping with the local culture. The provision of a ramp would therefore seem to be a functional concept : the prospect of a climb will not deter the general public – quite the opposite, in fact.