65 residences and a nursery 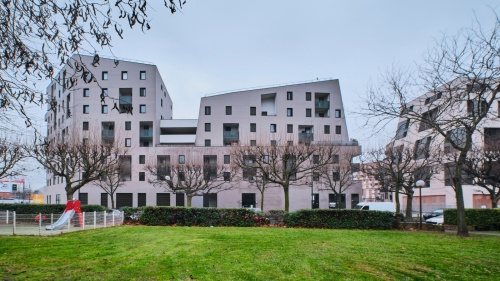 The property development in block D is comprised of three residential structures (A, B and C). Business premises (craft businesses) and a nursery occupy a major part of the ground floor spaces. Multifunctionality is a key point of this project.

A social mix of subsidized housing and new owner homes, including apartments of various categories (from studio flats to T5 apartments, simplex and duplex structures) and a multifunctional planning mix of housing, businesses and an early years childcare facility (nursery) form part of a single lot.

Ultimately, common ownership allows the block to assume a strong overall identity: this involves a system of urban construction with a strong common language, rather than a conglomeration of isolated objects. The intended unit structure for block D has also been developed in consultation with the architects of the future block C, in the interests of the achievement of the greatest possible coherence in the scale of the Urban Development Zone, particularly on the side of the Boulevard de la Boissière.

A continuous transition is thus achieved from the scale of an individual building to the scale of the Urban Development Zone. The new structural frontage on the Boulevard de la Boissière is conducive to permeability and visual exchanges between the town, the heart of block D and the surrounding landscape. The Boulevard is enlivened by a skyline of varying roof structures. In combination with variations in gapping, these two features generate a multitude of framing structures, which provide different views according to the position and the height of the viewer.

Preferred colours encompass every shade of white and grey, which may be punctuated by touches of deep brown or bronze. Light colours permit smooth integration in the site, avoiding excessive prominence. The main materials used in the outer shells are brick facings with rendering.