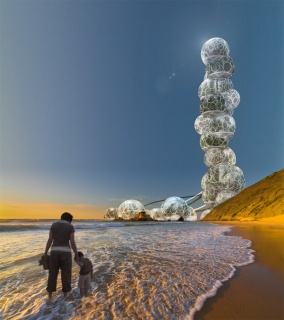 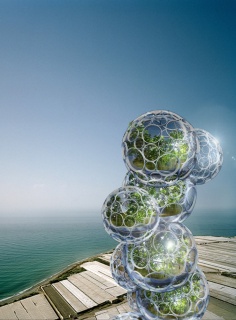 Although water is highly abundant on Earth, saltwater accounts for 97% of this resource, while 2% is immobilized in the form of ice. This leaves just 1% or so of fresh water in liquid form.

However, it takes 3,000 litres of water to produce the average daily food ration of a human being, and demand for water is rising each year by 64 billion cubic metres. Global distribution of fresh water is poor, with 1.4 billion inhabitants having no access to this resource. The UN and the World Water Council are apprehensive of a water crisis which might affect nearly half of the world’s population by 2030. Consequently, fresh water is one of the key ecological issues of the 21st century.

Our project involves a genuine vertical hothouse in the form of a tower, comprised of a series of tanks in which mangroves are cultivated. Mangroves possess a particular property, in that they absorb seawater, which is then regenerated by the evaporation of desalinated water vapour into the air. Water present in the air is recovered by condensation on the plastic shell structure of the hothouses, and is then collected in fresh water tanks. Water is driven through the tower by tidal-powered turbines, which pump seawater. The network of pipes which irrigate the tower also fulfil a structural function.

Moreover, by high-level storage, the fresh water thus produced can be redistributed using gravitational energy. The tower, with a surface area of one hectare divided into stages, is expected to produce 30,000 litres of fresh water per day. Our tower-based ecosystem constitutes a productive tower : a freshwater factory tower. This represents a new response to the needs of agriculture, which is responsible for 70% of global water consumption.