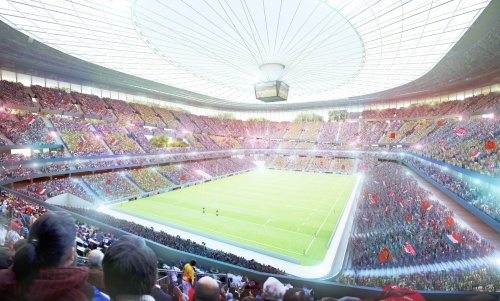 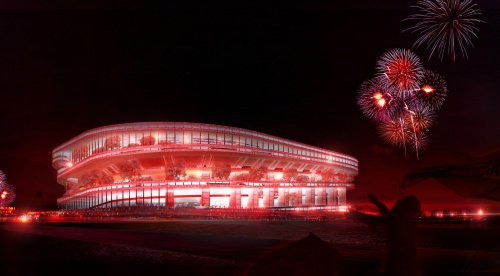 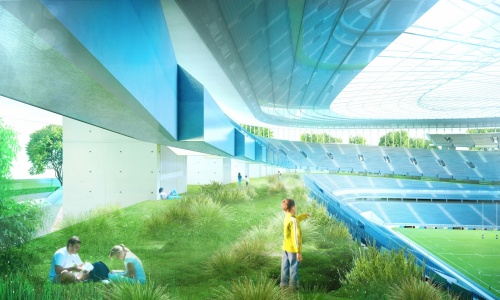 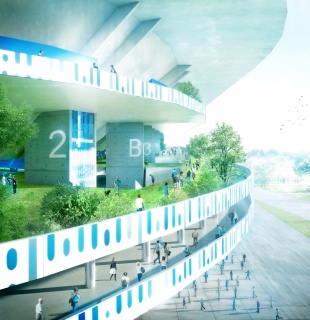 As iconic design works for the fulfilment of a representational brief, new stadia convey the image of a club, a town or a region. Paradoxically, these formal considerations relate to the shell structure, and enshrine the singular status of the stadium as an independent object, which is disconnected from its environment.

Concept Stadium© is a proposal which exploits the utility of a stadium as an urban object. In this case, the Stadium, as a building constructed around an empty space, is made available to the city as a public space and a place of recreation.

Concept Stadium is not an arena which stands empty 95% of the time. This is a public space, which also hosts sporting events. The arrangement of two-level ramps which encircles the stands provides multi-purpose activity areas, where visitors are free to circulate and occupy themselves outside the waymarked routes (whether reclining, sitting, picnicking, reading, running, playing ball or badminton). The Concept Stadium is intended to function as a local space for everyday use, with peak periods in the late afternoon, on Wednesdays and at weekends. Accordingly, the Stadium is also a park. The park will be equipped with small-scale public facilities which will contribute to the life of the district, and to its appeal on an urban scale.

Based around the stands, the park will be a place of relaxation offering numerous sporting and cultural activities, a place for walking, or simply for lounging on a bench. The traditional annular stadium layout has been reworked here into a continuous ramp which encircles the stands, forming a continuous and fluid pathway from the forecourt right up to the top of the terraces. This ramped walkway is developed as a garden space, then broadens into a two-level ramp which, at its lower level, accommodates a pedestrian gallery which flanks areas for the development of shops or small-scale facilities such as, for example, a rugby museum. Intermediate ramps are interposed between the two twin ramps. These are connected to vomitories, and accommodate retail outlets and sanitary facilities for the use of spectators on match days.